Introducing a new medical device to market is often a lengthy, difficult and expensive process. If the device is the first-of-its-kind therapeutic solution, the regulatory approval process is very long and requires pre-clinical and clinical trials. The costliness of this process forces many small companies to not pursue new therapeutic devices or they have to move offshore to get potentially lifesaving products approved. This reality forces small companies to very tightly control development and product costs long before commercial rollout. 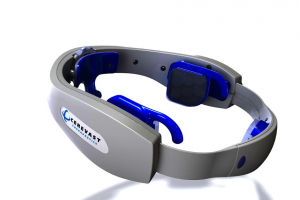 As a small startup, Cerevast Therapeutics was facing the challenges of raising capital and tightly managing resources while developing a device used in the treatment of acute ischemic stroke. The company needed over 200 units for its clinical study. Transducers are notoriously expensive, in part because of how difficult they are to build. Cerevast was facing a 7-figure number just to build the units needed for the trial.

Design a lower cost method of building transducers for the device.

The initial project for TransducerWorks was a manufacturing process improvement project. The TransducerWorks team quickly realized that this was not just a process improvement project. A complete redesign of the transducer and its enclosure was ultimately undertaken. Included in this redesign was a replacement in outer casing materials, and a redesigned acoustic lens that improved overall performance.

A material change in the outer casing material, improved the patient safety by eliminating the risk of electric shock to patients. The new casing also improved device durability with no sacrifice in biocompatibility, durability or performance. Cerevast’s Chief Operating Officer, John Alleman, has added “We envision this device will one day be in every ER and every ambulance in the world. In these settings, equipment often gets handled in a less than gentle manner, and understandably so. The redesigned transducer is exceedingly robust in its ability to handle rough use. When we add improved transmission performance and much lower variability – well, this is a game-changer for us.”
How much was the performance improvement? According to Matt Spigelmyer, TransducerWorks' leader of the development team, “We were able to achieve a 6 dB improvement in performance, which translates to a roughly 50% improvement in performance.” While all of these benefits thrilled Cerevast, what thrilled them the most was that the redesigned product and build process reduced the cost of the transducers by 75%, turning the initial 7-figure build cost, into a much more manageable 6-figure sum.