HIFU is an acronym for High Intensity Focus Ultrasound. HIFU is strategically directed ultrasound waves from multiple sources that converge at a precise point. Where this conversion occurs heat is generated. HIFU can generate enough heat to  vaporize objects that are being subject to HIFU waves. The applications of this include non-invasive procedures to remove tumors both internal and external without performing surgery, eliminating many of the risks associated with surgery. 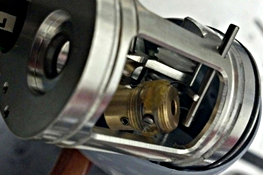 HIFU is one of the most exciting new areas of ultrasound development. It has the potential to revolutionize how we treat numerous diseases and perform surgery. Any surgery performed to remove a growth or tumor could one day be replaced by a non-invasive HIFU treatment. Chemotherapy for example is another treatment that could be drastically reduced with the development of HIFU. Modern medicine operates on the idea that in order to treat someone, you have to kill and remove what is making the patient sick. Our bodies work the same way. A fever, is our body's attempt to denature or kill whatever is making it sick. The problem is that the very techniques employed naturally by your body and by modern medicine such as anti-biotics or chemotherapy also kill healthy cells and parts of the body. HIFU is different. HIFU is precise enough to attack what is making a person sick while leaving their healthy cells alone. This makes the treatment itself easier on patients while also providing a new tool to increase treatment success rate, and decrease recovery time.

If you have a concept for an application of HIFU, a device in development, or already a finished product that you think can be improved, TransducerWorks has the knowledge and capabilities to help design or re-design your transducer components. Our experienced team has worked on numerous HIFU transducer projects, and given the possibilities of what this technology may someday be able to do, are extremely eager for more.